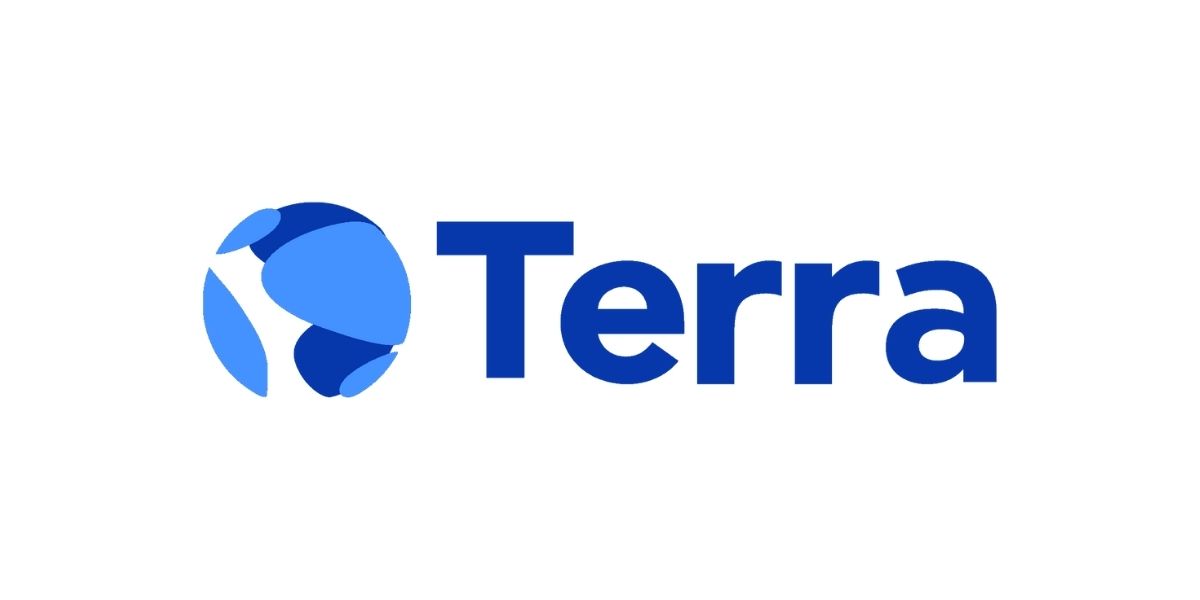 With the price of Terra (LUNA) jumping by 75% during Febuary alone, we thought it was worth a deep dive to see what this project is all about.

The world of stablecoins is nothing new within the cryptocurrency industry; however, no matter how much stablecoins attempt to stay as close as possible to the $1 price range, you will typically see them drop under it to $0.99 or, in some cases, even lower than that.

This challenge of maintaining a value as close as possible to the US dollar is something that many cryptocurrency projects are aiming to solve.

Terra (LUNA) is one such project, which takes a unique take on this issue. Let’s dive into exactly what Terra is, how it works, and how it can impact and shape the future of money.

What is Terra (LUNA)?

Terra is a blockchain network that was specifically developed through the utilization of Cosmos SDK, which specializes in stablecoin creation.

This essentially means that, instead of using FIAT, or over-collateralized crypto as its reserve, something utilized within competing projects, every single Terra stablecoin is convertible into the native cryptocurrency token that powers the Terra network, known as LUNA.

LUNA is a token that allows its holders to pay for any of the network fees that they incur on the network. Alongside that, it gives them the possibility of participation in governance, and they can even stake in the Tendermint Delegated Proof of Stake consensus mechanism, through which they can peg stablecoins.

For someone to peg a stablecoin such as Terra USD (UST), a USD value of LUNA is converted at a ratio of 1:1 with UST tokens.

If the price of UST is $0.98, as an example, arbitrageurs swap 1 UST for $1 of USD and make it 2 cents. This mechanism is aimed at increasing the demand for UST and reducing its supply as the UST is burned.

On the opposite end of this spectrum, if UST is above $1, for example, $1.02, arbitrageurs convert $1 of LUNA into 1 UST and make 2 cents. This supply of UST increases, and demand for UST decreases, which essentially brings the value back to peg.

However, validators and delegators can essentially stake LUNA for rewards alongside filling this function. These two actors play an essential part in keeping the overall network security through the process of confirming transactions.

However, LUNA as a token is one that can be bought, sold, traded, and staked as a means of participating within the governance process.

On February 23, 2022, LUNA became the best-performing major cryptocurrency throughout the span of 24 hours. The cryptocurrency managed to increase in value 15%, which made it top the $55 mark and outshine any other token. 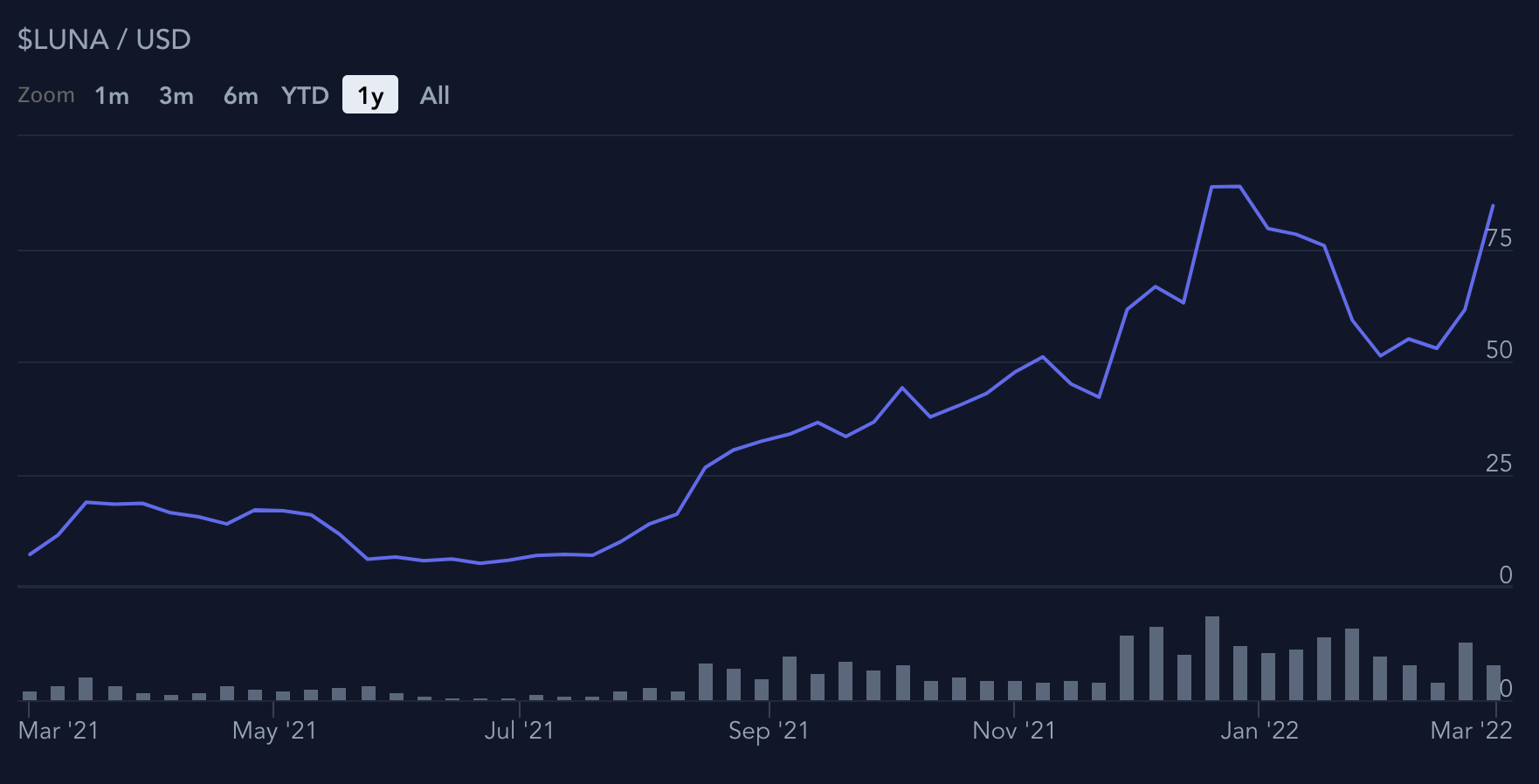 This leadership from LUNA can be attributed to the Singapore-based non-profit organization Luna Foundation Guard's (LFG) decision to create a bitcoin-denominated reserve as an additional layer of security for UST.

Additionally, LFG also announced on Tuesday that they managed to raise $1 billion through a private token sale to build the Bitcoin (BTC) reserve, and the buyers will lock up the coins for a four-year vesting period as well. This was a funding round that was led by Jump Crypto and Three Arrows Capital, among others.

Alongside all of that, on February 23, we saw Terra USD (UST) get listed on the Bittrex Exchange, with the following markets: BTC-UST, USD-UST, USDT-UST.

The Terra (LUNA) ecosystem Cambrian explosion started. This led to a record number of protocols being announced and ones launched.

These include Astroport, PRISM, Edge Protocol, White Whale, Mars Protocol, and Kinetic Money. The future of the Terra (LUNA) ecosystem will highly likely be filled with a lot more developments such as these.

Regarding the price updates related to Terra (LUNA), it's all-time high value was achieved on December 27, 2021, when the token reached a value of $103.34.

Since the launch of Terra (LUNA), it has seen a high level of growth among its community members. As of February 25, 2022, the project has over 341,300 followers on Twitter.

Terra Ecosystem giving us some of the only green lifeboats in the sea of red over the past week...$LUNA $ANC pic.twitter.com/Y7q75zf5WU

Let me tell you the next...

3. $LUNA #TERRA has $LUNA and $UST in top 20 Market Cap. $UST adoption is everywhere$LUNA a deflationary asset due to $UST demand.

We are going to the moon!!!

@Cephii1 said “The rise of $luna to market cap #3 after $eth will be violent. The moon keeps moving higher. We make the future. #Terra #lunatic”

The rise of $luna to market cap #3 after $eth will be violent. The moon keeps moving higher. We make the future. #Terra #lunatic pic.twitter.com/bMgalGSnKE

Terra (LUNA) is an excellent overall project that utilizes a unique mechanism through its two-token system as a means of maintaining its stablecoin value as close to the $1 mark as possible.

While other cryptocurrencies struggled, they maintained a solid growth level even throughout many dark market conditions. With numerous protocols launched for it and numerous other developments on the way, Terra (LUNA) is a project worth keeping your attention on.

View Free Terra Luna Classic Report
Important Disclaimer: This material is for informational purposes only. None of the material or any material on the stack.money website should be interpreted as investment advice. Stack does not make any express or implied warranties, representations or endorsements whatsoever with regard to the material or related information. In particular, you agree that Stack and it's owners assume no warranty for the correctness, accuracy and completeness of the material.