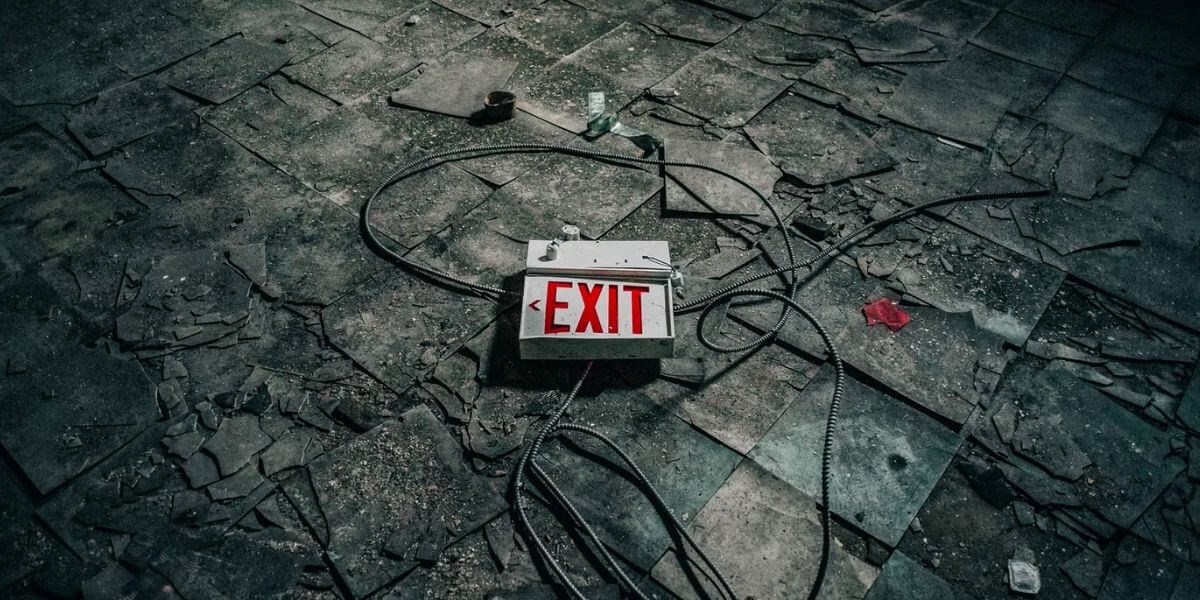 At Stack, we track the developer activity for thousands of digital assets like Ethereum, Bitcoin and Solana.

All software has bugs and needs to continually evolve to stay competitive. That's why we believe developer activity is one of the best leading indicators of the long term success for any crypto project.

Many well known projects are incredibly popular with developers. For example, Cardano had 660 developers contribute during the past year. Ethereum and several of its competitors are also thriving, with large, active developer communities.

As you work down the list, though, a different picture emerges. Many projects appear to be all but dead. Effectively abandoned by developers yet still available for anyone to trade. 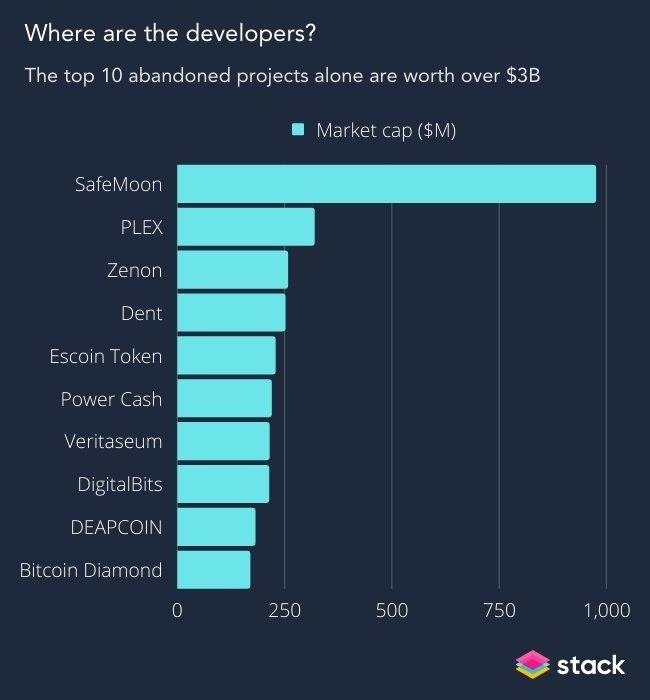 On average, projects in the top 500 market cap are updated 357 times a year. We've identified potentially hundreds of assets that fall below that level.

Despite the lack of activity, many have a market capitalizations well into the hundreds of millions of dollars.

Here we have selected just the 10 largest by market cap, though. We contacted all the projects above to check we had the correct GitHub data. Only Escoin replied.

SafeMoon (safemoonprotocol) - 5 contributions in the past year.

Only a single contract is open source, and major decentralization and source code quality issues have been identified by security firm Certik.

PLEX (mineplexio) - 5 contributions in the past year.

Zenon (zenon-network) - 5 contributions in the past year.

Dent (dentcoin) - 0 contributions in the past year.

After contacting them, the project owners simply told us that the source code was not open source.

DigitalBits (DigitalBitsOrg) - 0 contributions in the past year.

DEAPCOIN (Digita-Entertainment-Asset) - 0 contributions in the past year.

Veritaseum (veritaseum) - 0 contributions in the past year.

Bitcoin Diamond (eveybcd) - 0 contributions in the past year.

The importance of open source code in crypto

It’s possible some of these projects are doing work that isn’t public. But why? The vast majority of crypto projects are entirely open sourced — by necessity — so code can be checked and ensured that it’s safe.

Transparency and the ability for anyone to contribute and check code is at the core of all legitimate crypto projects.

Methodology note: some projects did feature higher but, for expected reasons, had very few commits. E.g. Wrapped Bitcoin and other ERC-20 tokens with simple utility function. The projects identified above have all been selected because any reasonable person would expect the vast majority of their source code to be open source and active.

What does this mean for crypto investors?

Investing in a project that is no longer being actively developed is clearly adding another layer of risk. Even if short term hype is enough for the market to ignore the facts, eventually it’ll catch up and capital will be allocated to successful, active projects instead.

The good news is that it’s relatively easy to add a check for developer activity to your due diligence process, before making an investment.

You can usually find a link to most cryptos GitHub accounts somewhere on their website. From there, you can browse the project’s repositories to get an idea on how many contributors there are and how frequently it is updated.

Alternatively, you can use Stack to quickly get an overview on how active the developers for a project are, across all the major repositories.

Which crypto projects are active?

A lot. Developer activity has grown significantly over the past year. With thousands of new developers joining Web3 each month.

At the time of writing, here’s the top projects by total contributors in the past year. 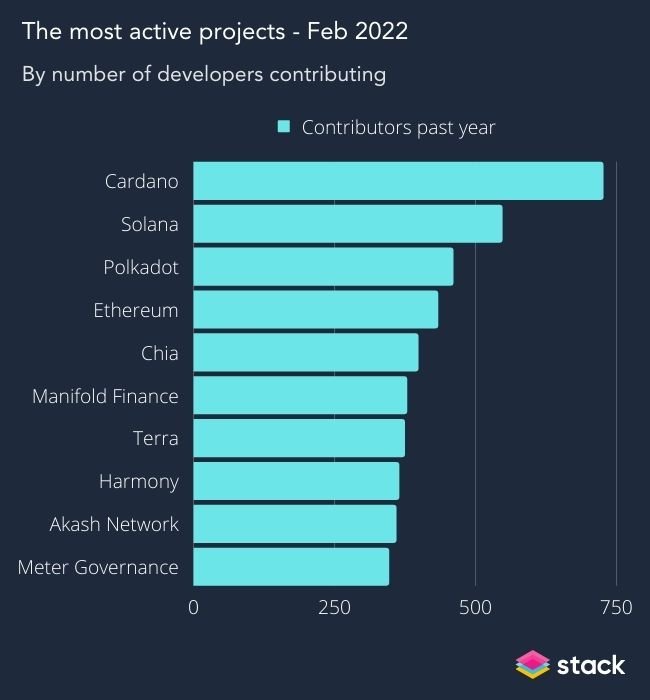 Please note, the chart above does not necessarily represent the extended ecosystems for some projects like Ethereum, where code can be spread across multiple GitHub organizations. We track each organization separately to avoid making editorial decisions on whether a GitHub org falls into one project or another, as they can often relate to multiple.

In order to gather the data for this, first we constructed a massive database of crypto assets with their corresponding Github repositories.

Then, we used the Github API to fetch the total number of contributors and the corresponding commits, additions and deletions they made to each repository.

This enables Stack to show you the overall developer activity for any crypto project. We then sum this activity into a score for each project and calculate a percentile rank for quick screening.